Advanced Kiting Clinic is one of the most interesting courses offered in Templepilots. It is by far one of my favourites. Flying is one thing, but getting to know the glider behaviour and controlling it effectively on the ground is the most satisfying experience ever. After my Kiting Clinic, I was able to accomplish smooth and confident takeoffs, both reverse and forward launch. Not to mention improved smooth and targeted landings. Yet there was another milestone I was able to achieve, top landing! Wow! What a blissful feeling! Another joyful experience was rock climbing and staying on it for a specified time period. Taming the glider to be in your control and being the boss makes you you feel like James Bond! You can take the glider where you want and not go where the glider takes you! Advanced inflating techniques are great to learn in this course. Can you imagine inflating the glider without touching the ground? Yes! It is possible with a little more effort, hard work, dedication and perseverance! All I can say about the Kiting Clinic course is that it brings you closer to the sport, makes you one with the glider and truly makes you fly like a bird as if the sky is your home and flying is second nature to you! And all this doesn’t sound to be complete without mentioning and giving due credit to the amazing Trainers, Teachers, Gurus and Mentors in Templepilots who always endeavour you to achieve greater heights (literally) and find your true happiness in life! Cheers to Templepilots! I am glad, overwhelmed and feel blessed to be a part of Templepilots Flying Family!!!

The winds (and the TP tempo traveller) took us to Tower East on two days and the scenic Pawana lake on the rest.

The drill – gain adequate height, head out, execute the pre-planned manoeuvre 2-3 times, return to the slope for the next one.

Got really comfortable with my new wing in the process, discovered what EN-A safety really means. The “scary” frontal collapse, B-Line stall and the Riser Twist manoeuvre were a breeze! I was actually facing backwards for several seconds on the last one, hanging onto the risers with no brakes, wondering why I wasn’t panicking!

Major insight – the ground is safe, and so’s the wing. Maintain adequate distance between the two and a strict watch on the pilot at all times.

Ganpat Sir conducted my course superbly, in his customary super cool style, guiding me through the manoeuvres while parallelly lecturing some high energy P2 and brand new club pilots on following ridge rules.

The Temple Pilots’ progression course is a great confidence builder and a must for the new club pilot with a few hours on the log. Takes away the fear of several unknowns, and makes flying that much more enjoyable.

Note: no P1s, P2s, Club Pilots or wings were harmed during the above progression course. Ridge rules, whenever broken were under supervision and with adequate eye contact!

Temple Pilot has been instrumental in fueling my passion for flying a non-motorized and non-fueled flights-Paragliding. I learned paragliding, in 2014, under the watchful eyes of the instructors of Temple Pilots headed by Avi Malik, a veteran in this sport and well-known worldwide.
It took about 2 years for me to muster the courage to go for long flights and “leave the ridge”.I registered for a Termalling course with TP.Till this time I was comfortable with Ridge flying only.
It was one of the best things I have done in my flying courses. I slowly learned the how to find a termal, carving, catching the core and reacting to collapses.
The team at temple Pilots assess your flying skills and assign task as per your skill levels. The theory and the notes that are given before you actually go thermalling is immense. The simulations that are done on small flights is impeccable and set you up nicely for the big flights. I can never forget my first thermalling exercise.
It was not a perfect day though, but I had a good window of thermal forming and I was getting a nice lift, I stayed on the lift and continued my tight 360s. I was able to appreciate the carving and opening out towards the core. I would have done around 5 to 6 -360 s and I found myself that I have gained around 800 mts. It was such a great feeling. As a kid I learnt cycling as my dad holding the back of cycle and slowly he lets go and I was on my own, after few days of falling and getting to be on my own, I wanted to leave my apartment building and go out in the traffic roads. you probably would have done the same thing. Well, Its that lovely was feeling I had when I learned my thermalling with temple pilots.
If you are looking for a thermalling and XC course look no beyond from here. Just sign up, you will NOT regret.

The weather forecast was again on the better side. We were optimistic and brave to again make a mini XC plan. But today we chose a different take-off. As a pilot one should be always positive and hopeful.

We started our day at 7:30 am and reached on the take off at 8 am. Idea was to gain some airtime by doing an early morning soaring flight but unfortunately, the wind was not strong enough to launch immediately. We decided XC/Thermalling Pilots launch first so that they can practise independent take-offs and landing. By the time Pilots were ready, the wind slightly picked up. Those who flew had to work hard to maintain the height and such conditions ensured all Pilots to give their best. These conditions are perfect to increase the efficiency of your turns. Every roll and pitch movement does cost you altitude loss and that’s the reason you learn the most on such days than reliable strong windy soaring days. All the Pilots again did independent landings safely.

The local driver on landing generously offered the Pilots to come to his house for breakfast and Pilots could experience the hospitality of kind-hearted locals. The whole group was humbled and overwhelmed by this beautiful gesture.

We started second take offs for Thermalling XC students at around 1 pm. One of the lessons learnt by the Pilots today was the efficiency of preparing the equipment prior to taking off. Every second on the take-off plays an important role once conditions are perfectly flyable. If the pilot takes 15 mins to get ready then the pilot has already missed min 5-6 thermic cycles of perfectly timed take off. Big lesson learnt today, keep your gear ready and once the window is available, one must get ready in 2-3 mins. Secondly, the timing of the take-off and a right take-off technique. As per the plan, I took off and started marking thermals for Pilots. Soon I was joined by a couple of Pilots and all were at a positive place. Due to the wrong timing of the take-off and poor take-off technique, few Pilots started with the disadvantage and went below the take-off. Now everyone had to work hard to gain height and all the Pilots put in great effort to latch on to every lift they could get. As me, Jaidit and Srikanth was at around 1700+m, we decided to continue to do transition to the next ridge which was Sydney point. After refuelling there altitude at Sydney point thermal they continued towards the lake and landed at Boat club. Our whole pilot gang was thrilled to see the first 15+ km XC of the course. Those who couldn’t do the XC, worked hard to get altitude and put in commendable efforts to work on weak thermals.

In all, again once a more satisfying day and a very rich day in terms of learnings. Thank you team Temple Pilots!!

I began my SIV course with Templepilots in Bilaspur, Himachal Pradesh on October 2017. I did my schooling with Templepilots somewhere between 2013 and 2014.
I now wish I should have done this SIV course much earlier. Why?
I am a low airtime paragliding pilot. I always wanted to fly in smooth conditions and get away from thermals !. wrong kind of thought.
This attitude did not help me, and fortunately, I opted for the SIV course in Bilaspur, not really knowing what it’s all about and whether I am a suitable pilot for it.
I read about the SIV course, watched videos and wondered, whether I would be able to accomplish the tasks. A decision was made with my two other friends to get into the SIV.
Unfortunately, my friends couldn’t make it; and therefore I was left wondering.

The team for Bilaspur 2017, comprised of pilots from the United Kingdom, Israel, Middle East, Europe and India. We all reached this beautiful place and settled with a very humble and hospitable group of families, where we would spend the rest of our days, eating and sleeping. I was so humbled by the way these people treated all of us.

The Day started with fresh local breakfast and most importantly, the briefing, I ought to say “ in depth rather”. The instructors would check everyone’s gear as well as give us just about information that was needed for that particular day. It was all the instructors, who helped all of us to get into our tasks with the right decisions. The Chief, the instructor along with his team which included the rescue, had it all planned so well for all of us…….it was tailored for each individual and that’s what I liked so much about that kind of care.

Tasks: We all started with the Basic manoeuvres like the dolphins, asymmetric collapses with and without speed bar, and progressives spirals and then it went on with full stalls along with spin with a full stall and many had even performed the SAT too. All this were done under strict safety standards and the rescue team were very much involved. Pilots had an awesome time doing about three to fours flight alongside tasks. The Instructors Avi (Chief), along with Jitu and Sachin were on their feet at all times, seldom did they sit down. Their exhausted bodies and faces could well be seen when we all reached the base camp. The Final day came when we had the option of deploying our reserves, and I now think I made the right decision with the aid of the instructors and their motivation and show of confidence. I made it!

What did I achieve in this course?

Perhaps, if I wouldn’t have enrolled in it, I would have been the same kind of pilot years ago. I should have enrolled in this kind of course as soon as I finished my CC with some airtime. It brought about a whole new dimension as to what one can do with the wing and the knowledge imparted by the instructor were pertinent to fly with confidence and safety. I would say this with all my wiseness and mind; “The SIV will teach you not only about what’s is imbibed in, but would sharpen the pilot’s mind, attitude and discipline “. 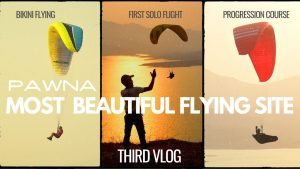 Things to check before you choose a Best Paragliding School